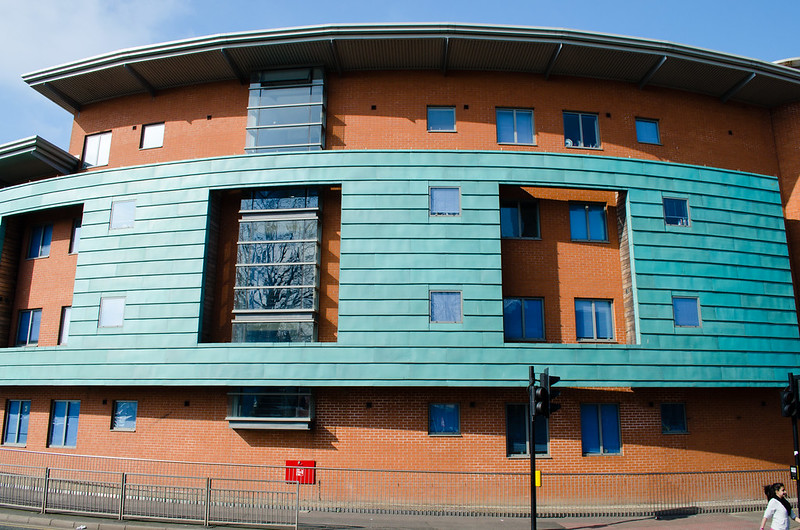 The adult ed centre on St George’s Parade is one of the few distinctive and attractive recent buildings in the city centre.

The area it is in is likely to become even more of a backwater when Sainsbury’s make their planned move to their new site. 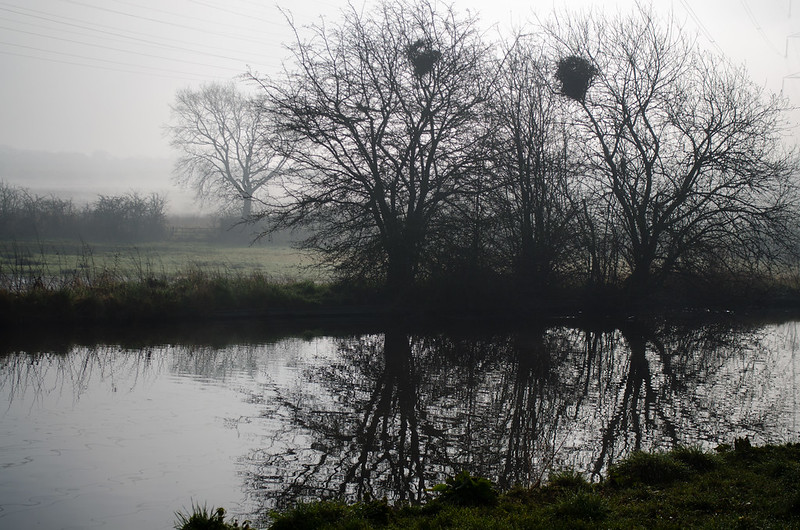 Misty view of the Staffs & Worcs canal heading downstream just outside Wombourne on a misty morning.

The large nests in the bushes probably belong to magpies. 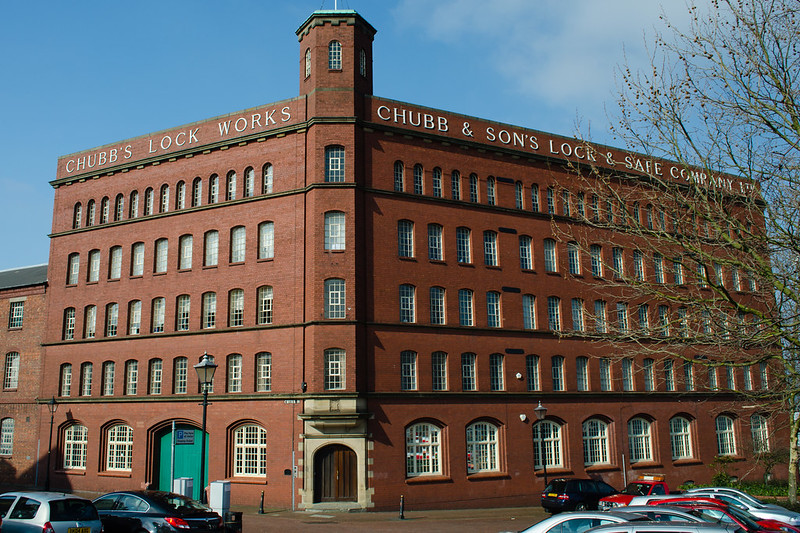 One of the characteristic sights of Wolverhampton city centre, the distinctive building which began life as the Chubb factory. 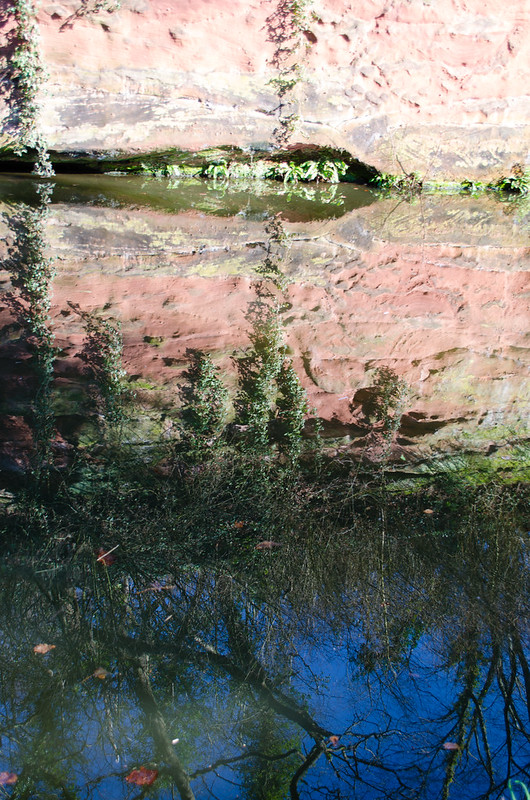 Another cutting in sandstone to make way for a transport corridor. This sandstone cliff was created roughly a century earlier than the ones in the previous post. It’s on the Staffs & Worcs canal, a short distance from the canal’s crossing of the river Stour near Stourton.

The picture shows the base of the cliff, ivy trailing down from above; ferns growing in a niche at water level, and the reflection in the water.

It is noticeable how much less vegetation has managed to establish itself on this rock compared with the railway cutting. Is that because of the steeper rock face, or because it is a different type of sandstone? 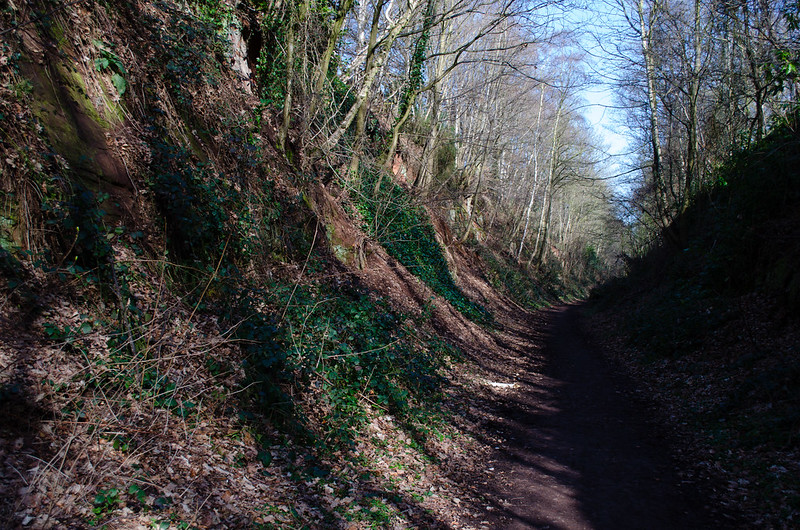 A section of the South Staffordshire Railway Walk, along the course of the same former single-track railway which figures in the Smestow Valley LNR.

Here, just north of the B4176, the line has been kept more or less level by quarrying a cutting out of the sandstone, which now has a good covering of trees, mosses, lichens and leaf-litter. 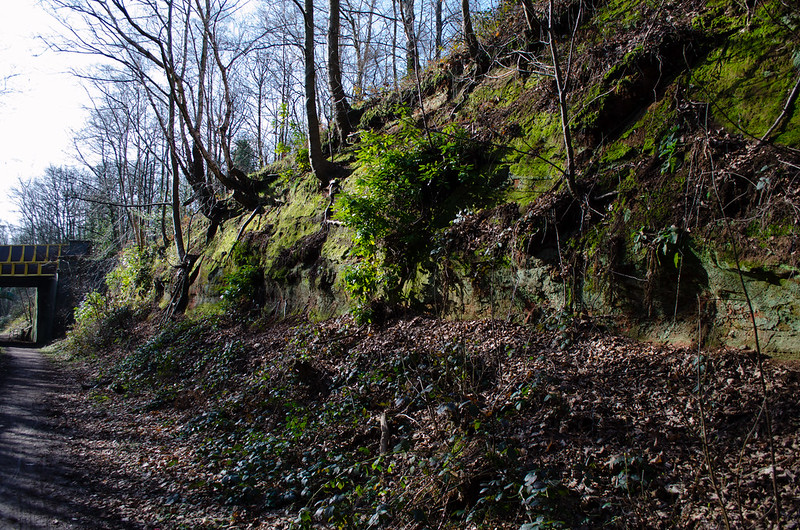 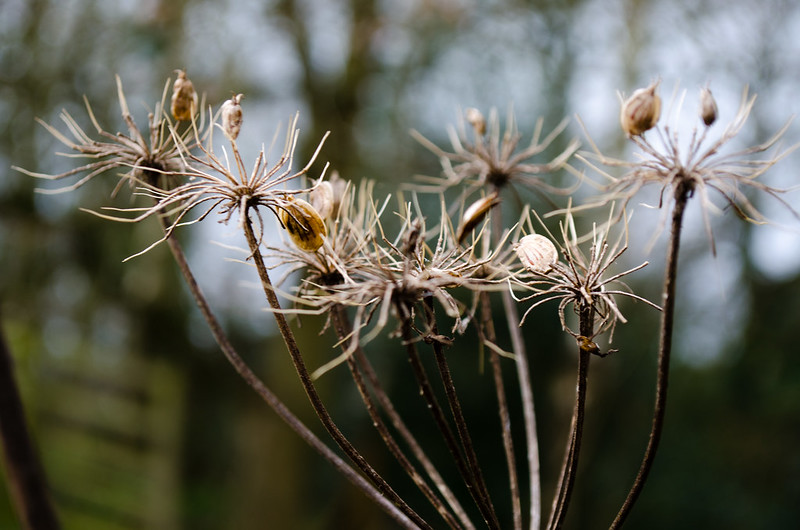 This skeleton of last year’s umbellifer is in contrast to the vivid green of the new growth of the bluebell leaves. A handful of the seeds are still clinging on to the plant. 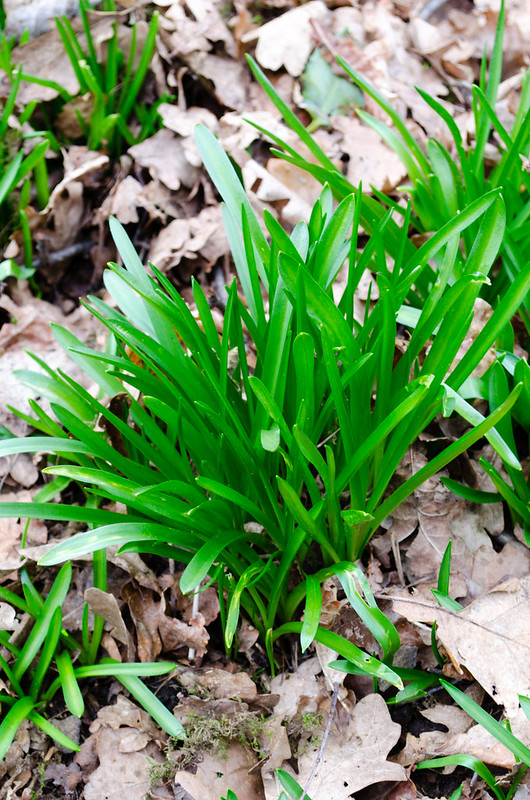 Today’s posts are of two subjects I noticed within yards of one another on the path connecting the Barley Field and Railway Walk in the Smestow Valley LNR. Here the leaves of one of a clump of bluebells growing strongly. The blooms themselves should be at their best in a couple of weeks. 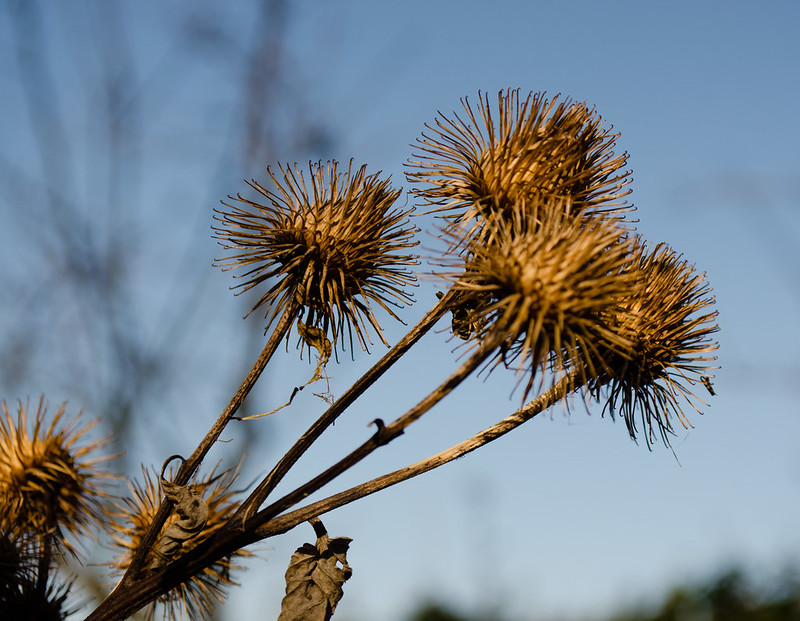 I spotted these burdock seed-heads while I had the camera out to picture Rocky Lock (previous post). 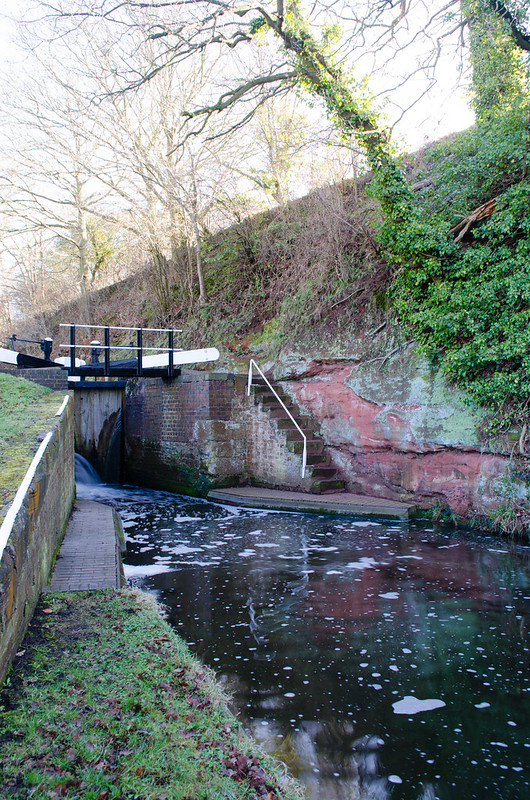 Rocky lock, on the Staffs & Worcs canal, is on a section of the canal between Greensforge and the crossing of the river Stour where there are several stretches with the east bank of the canal being artificial sandstone cliffs formed by quarrying out of the native rock to make the cut. One spot this happens is the well-named Rocky Lock, seen here from both canal levels. 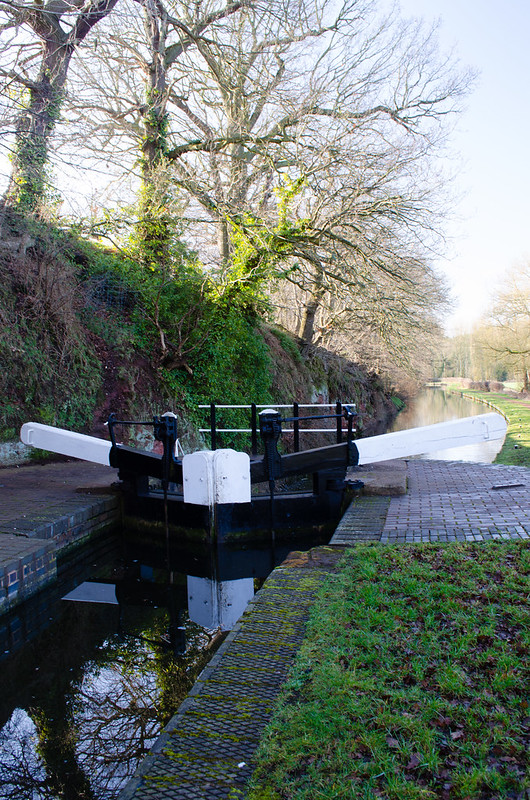 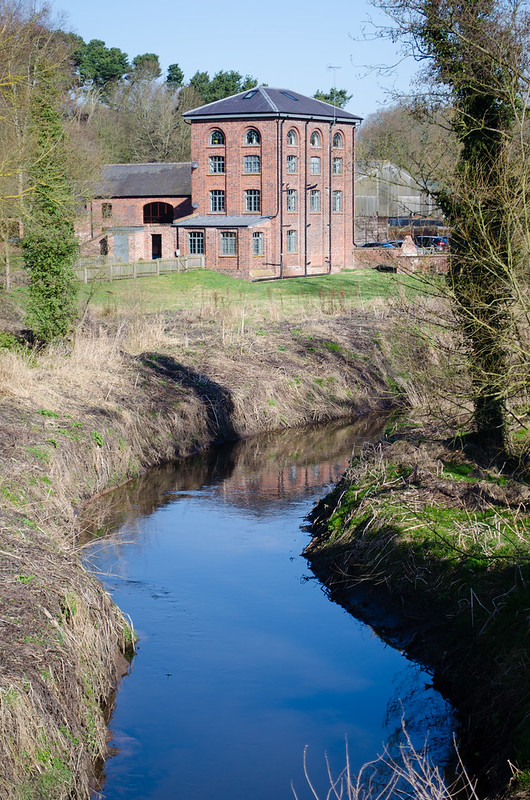 The building by the river Smestow is on the site where there were iron workings from the seventeenth century. There are claims that Mr Green’s forge used the iron produced by Dud Dudley.

Iron working continued here into the nineteenth century, using the stream as a source of water power. The opening of the Staffs & Worcs canal will have helped transport (this picture was taken from the canal towpath at Greensford).

The works was rebuilt as a corn mill in the late nineteenth century. It carried on working until the mid-1920s, and was converted into apartments in the 1980s. 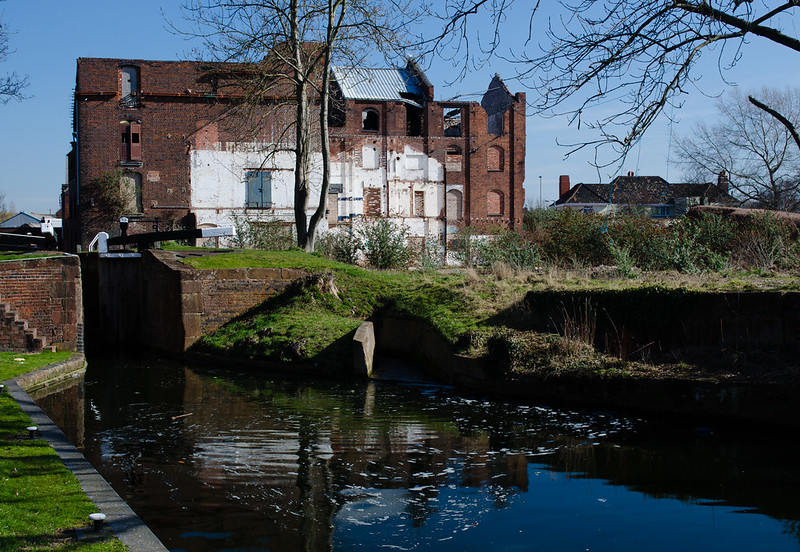 The former glass warehouse at Wordsley, opposite the Red House Glass Cone, which is hidden behind the warehouse in these pictures.

The warehouse is currently derelict, but is scheduled to be redeveloped, expanding the museum. 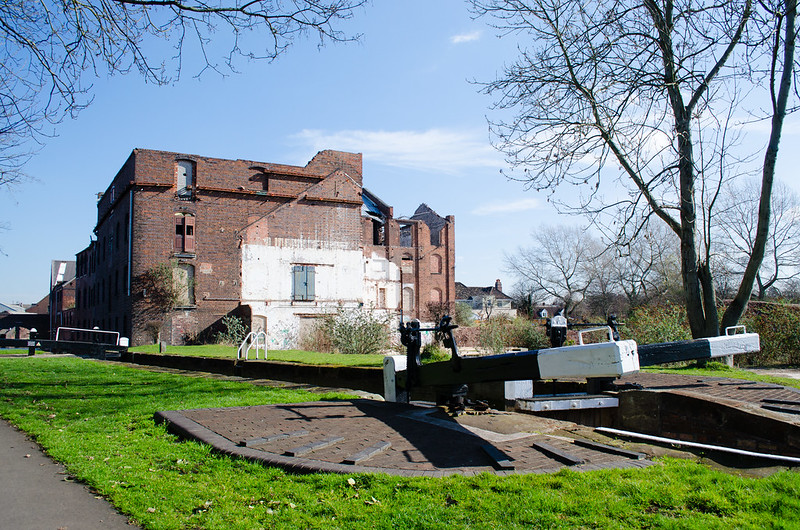 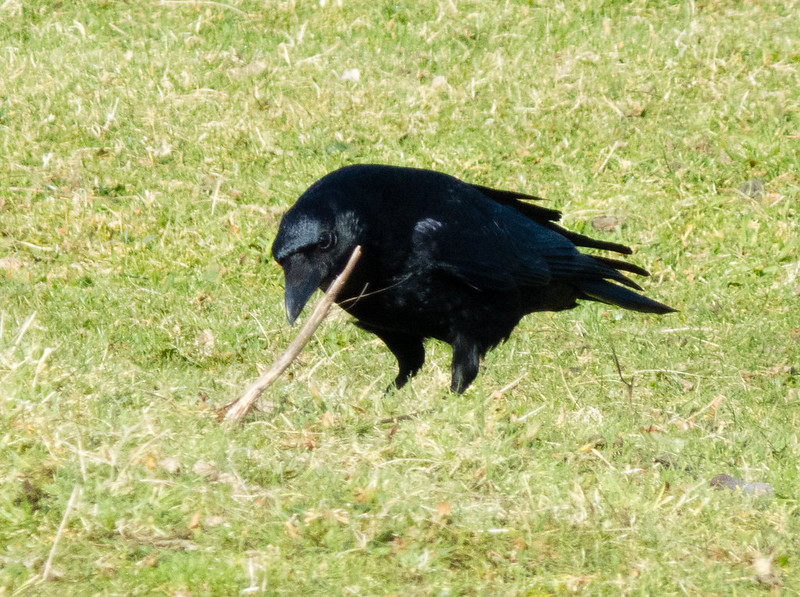 This crow was prospecting the ground near the lake at Perton in search of something to eat. 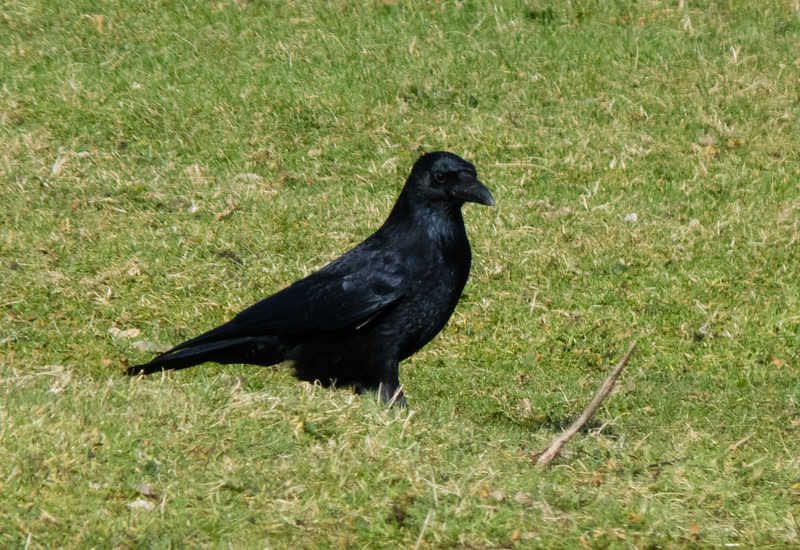