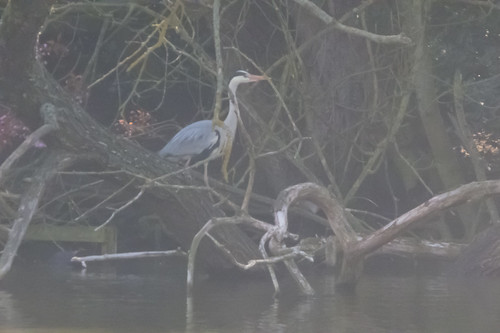 The heron featured in the previous post, a couple of minutes later.

When I had got far enough round the lake to spot the bird again, it was on a branch near the water. It seemed to be alternating between scanning the water, and eating something it found on nearby branches.

It took off, flew briefly and landed on a higher branch. There it grabbed a twig in its beak, and took off again. This time it flew an even shorter distance to land by another heron, which it interacted with, starting off by presenting the twig it was carrying.

My local bird expert suggests they may have been indulging in a courtship routine. This starts with the male presenting nesting material to the female.

The presumed male’s nuptial plumes can be seen in the last two pictures in the set.