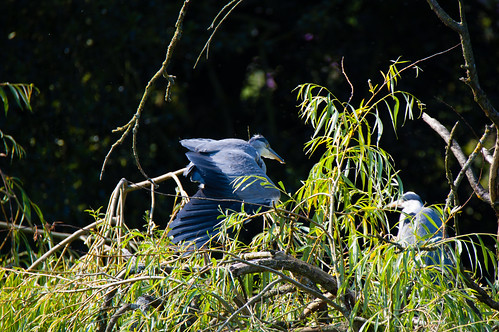 June 6th: the egg or eggs in the West Park herons’ nest had apparently hatched a week and a half previously. On the day that happened, the adult birds had been paying a lot of attention to the nest and its contents.

Since then, they had seemed to be spending their time away from each other and some distance from the nest, at the water’s edge, fishing an preening.

Now they appeared, both standing on a tree growing over the water from the other island in the lake, together with a young bird still losing the down it had when it hatched. The chick is the bird in the middle. Already it looked to be almost the same size as its parents. It has an odd-looking spread wing posture characteristic of young birds in a couple of the pictures. Its rear end has a nappy-like appearance, where the down has not yet been replaced by tail feathers.