Many wild plants are delicious raw or cooked. Some can be used to make herbal teas or home-brewed wines. Edible species of mushrooms (and other fungi) can also give flavours and textures which don’t come from anything you can buy in the shops.

Only eat things you have picked if you are certain you have got the right species. Do not use this site as your identification guide.

Be especially careful if you eat any fungi. If you eat the wrong ones you will be lucky to escape with an upset stomach. The worst might be eating a mushroom which causes an agonising death spread out over several days as your internal organs stop working. Remember that the fungi with the worst effects also have no known antidote. 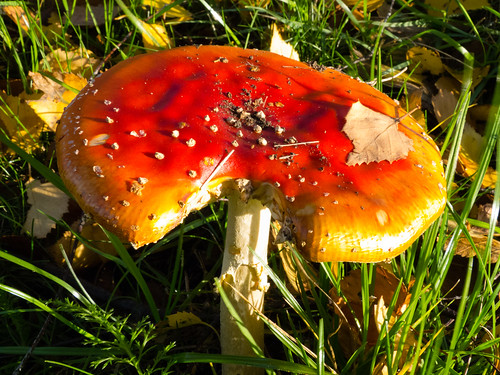 If you are sure what you are picking, wild food has several advantages. It’s fresh. It puts you in charge of deciding when something is at its best. It often has strong flavours – though that does mean it might not be to everyone’s taste. And, not to be neglected in these straightened times, it’s free.

If you do pick things to eat, stick to common stuff. Make sure everything is well washed – you don’t know what has been using it as a toilet.  Here are a couple of readily available things you might try:

Blackberries are common around the city and environs. Pick them in the autumn when they are ripe – black but not yet squishy. Watch out for them squashing and leaking a purple-staining juice if you pick a lot. Delicious raw or as the filling for a blackberry or blackberry and apple crumble.

These raise a lot more eyebrows, but they are common and nutritious. Use gloves to pick the top few inches of young plants – no later than June. Clean thoroughly, then they must be boiled to destroy the acid which causes the sting. Can be cooked and eaten like cabbage, or made into a soup.

Whinberries, also known as bilberries, are another, less common, autumn berry. Not found nearer to Wolverhampton than the south Shropshire hills. I haven’t actually picked any since I was a child living near the Pennines, but for me they are the taste of childhood. Local wild whinberries are the crowning glory of the sweets menu of the Stiperstones Inn, in the village of the same name in west Shropshire.

If you want more details about sources of wild food, recipe suggestions and the ethics of picking, a good starting point is the book which started off the trend in recent decades,
Food for Free by Richard Mabey [link to Amazon UK, also lists other books on the topic]