There are four canals which cross Wolverhampton: the Birmingham [officially the Birmingham Canals Navigation, often BCN]; the Staffs & Worcs; the Shropshire Union and the Wyrley and Essington.

The Staffs & Worcs joins the river Severn at Stourport to the Trent and Mersey canal at Great Haywood, Staffordshire. It crosses the city boundaries at Castlecroft and Pendeford.

The Birmingham Canal has its northern terminus at Aldersley Junction, where it meets the Staffs and Worcs. From there, it rises through twenty-odd locks to Broad Street Basin, next to the ring road. It heads south-east, leaving the city at Deepfields as it approaches the Coseley Tunnel.

Shropshire Union starts at Autherley Junction, just a few minutes stroll along the Staffs & Worcs towpath from Aldersley Junction. Its course in the city is pretty much limited to Pendeford. It leaves, continuing to head north to end meeting the river Mersey and the Manchester Ship canal. 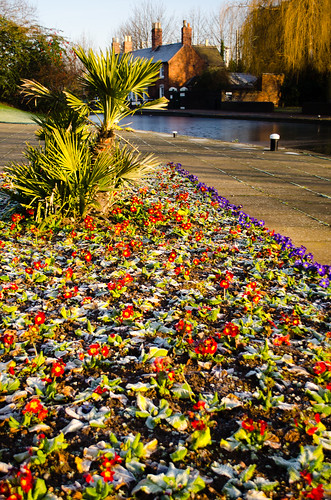 Wyrley and Essington is nicknamed the curly-wurly because it had to take a twisty route to follow the contours and to get as close as possible to the mines it originally served – the village named in its title is pronounced “wurly”. It branches from the Birmingham canal at Horseley Fields, heads through Wednesfield where it crosses into Walsall. It currently ends near Brownhills, but work is being done on the derelict sections further along.

Canals and their immediate margins give a variety of environments for wildlife. To me, the most obvious are the water birds. All the canals in the city have resident moorhens, coots, mallards, geese (mainly Canada geese) and swans. Herons can be common outside the breeding season, especially on sections of the Staffs and Worcs.

In spring, look out for a party of ducklings with their mother. Also for goslings, cygnets and moorhen and coot chicks. In winter there may be little grebes (dabchicks) as well as a greater chance of seeing other duck species.

Occasionally a kingfisher can be spotted perching as it waits to spot a fish, or flying as it heads for a new perch.

The margins of the canals are also a refuge for plants and fungi, especially those which like damp conditions. Patches of bullrushes and reeds grow on the water margin, usually on the opposite bank. Indian balsam is, as the name implies, an exotic. An invasive weed, but some of us find it attractive. There are flowers of the season, from snowdrops, then lesser celandines and violets, and later ubiquitous dandelions and buttercups.

Fungi are most likely to be found on the landward side of the towpath, especially where there is a hedge for them to lurk under.

Water voles are timid creatures. The best views I have ever had have been glimpses lasting a few seconds before they dived to hide. More often there is just the sound of a splash which might be a vole, but is more likely to be a frog or toad.

The canals reveal something of the underlying geology of the city. The so-called Pendeford Rockin’ on the Staffs and Worcs is in effect a short and shallow man-made gorge where a cutting had to pass through a particularly hard rock. They are also part of our industrial heritage – as the means of long-distance transport which enabled the area to play its part in the Industrial Revolution.

The towpaths of all canals within the city usually have a good surface for walkers: some sections muddy when wet. They are also fine for cycling (please give priority to walkers).

The same can be said for the whole length of the Birmingham canal, though the Coseley Tunnel has a bricked footpath where bikes should be walked. Likewise the Staffs & Worcs as it heads southwest from the city. This too has a couple of short tunnels. It also connects with the Dudley/Stourbridge canal network, which also have well maintained towpaths.

Footpaths by canals leaving the city in the other directions tend to be less intensively maintained. They can sometimes be narrow, and sometimes getting overgrown in summer. Some sections may be fine, while others offer only awkward walking and conditions which suit only the most determined and experienced off-road cyclists.